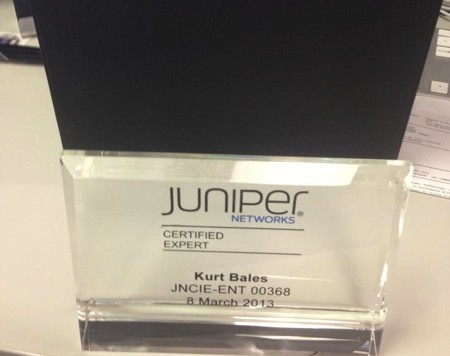 Finallyâ€¦ it was bound to happen. My three year journey is complete.

It was about this time last year that I posted about my second JNCIE-ENT lab attempt, and sadly it didn’t go the way I wanted it to! Â Due to work commitments I was not going to be prepared to sit the 2012 Q3 round of lab offerings, so I resolved to sit the December / January round.

I picked up my studies again and worked on my weak areas noted during my first two attempts. I paid particular attention to areas of multicast and switch security as these two topics were areas of weakness for me last time. I was lucky enough to work on a project at the end of last year that included nearly 1000 ports of 802.1x with dynamic VLAN allocation, so that proved to be an excellent “lab environment” for me.

After a need to reschedule for March, as the January exams were cancelled in Sydney, I knew I was going to do everything in my control to pass this time around. I didn’t want to face the thought of making attempt #4!

Long story short this time around I felt much more prepared and actually finished with more than enough time to go back through all of the questions to confirm the points I believed I had earned. I cannot say enough about good time management efforts during the lab. Set a maximum amount of time per question (or per point) and really make yourself stick to it. Unless you know you need this question to continue on to later questions, just leave it as it is (preferably in a non-broken state), and move on to other questions. Earn more points and come back later.

I finished up the exam reasonably confident, but I also knew I felt confident after attempt #2. I caught a train home and prepared myself for the 15 business day turn around for the exam results. Luckily I didn’t have to way this long to get my results, and after a couple of days I was advised that I had passed!

In previous posts Ive covered tips and tricks etc, so I would really like to dedicate this post to saying thanks to people. 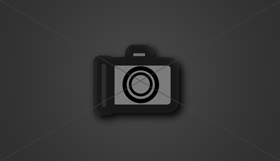